It’s “only a day” but many people LOVE to be in LOVE with the most romantic day of the year. We love hosting couples at The Camp and seeing people create lasting memories. It’s what we do.

If you needed any more convincing, here’s our guide to the romantic day itself from a nature perspective and some fun facts you may not know about Saint Valentine’s Day

Valentine's Day customs – sending greeting cards (known as “valentines”), offering confectionary and presenting flowers – developed in early modern England and spread throughout the English-speaking world in the 19th century. In the later 20th and early 21st centuries, these customs spread to other countries, like those of Hallowe'en, or than aspects of Christmas, (such as Santa Claus).

Valentine's Day is especially celebrated in many East Asian countries with Singaporeans, Chinese and South Koreans spending the most money on Valentine's gifts. Other countries have adapted the day to suit their cultural identities with new twists on this historic day (see below).* 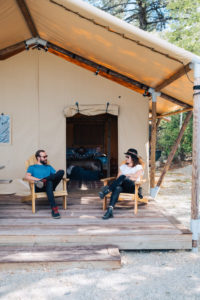 Have we convinced you that a nature date is the way to go this year? Checkout our Romance Glamping Packages here - Romance Package

Valentine’s Day - Did you know?